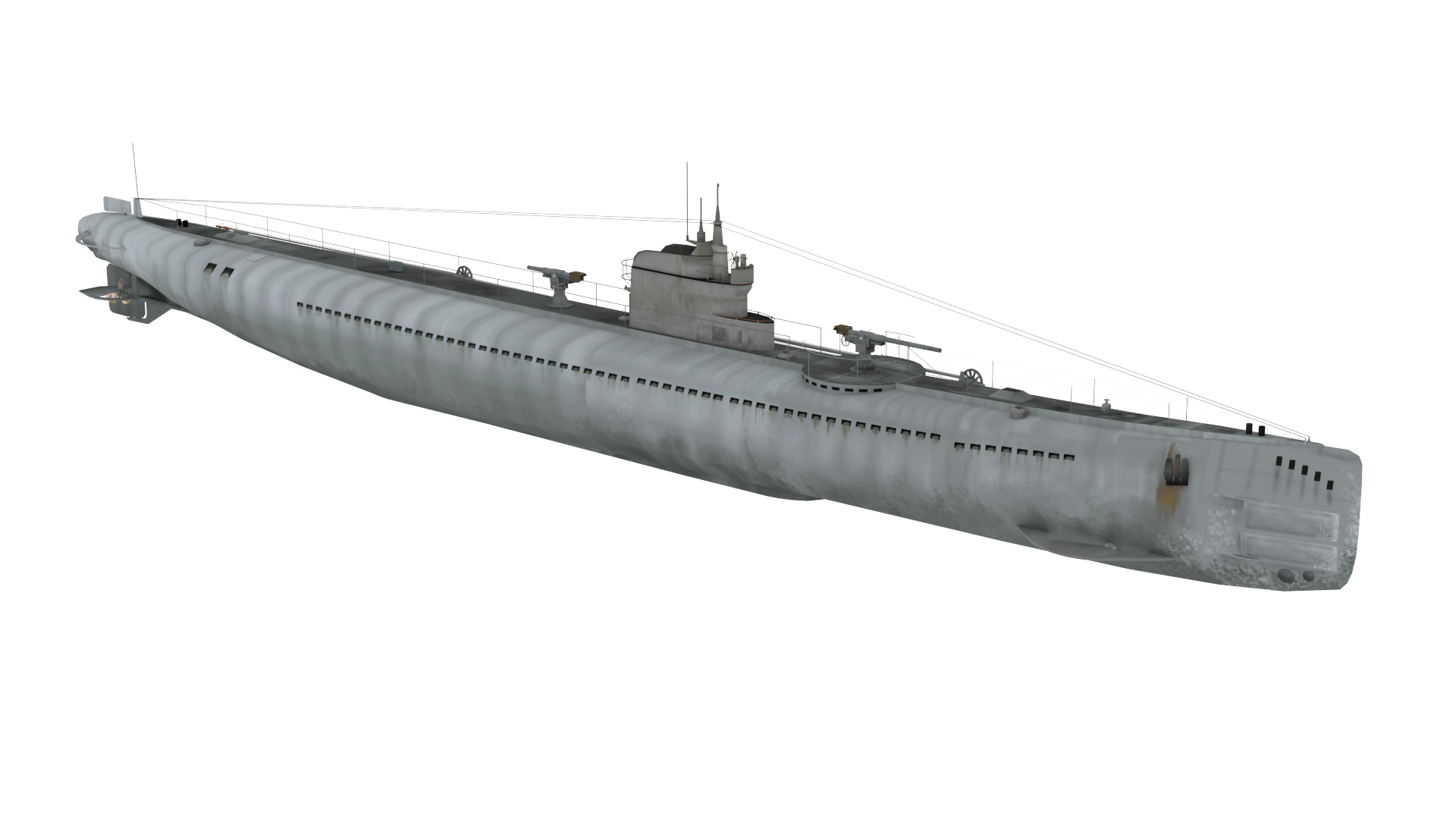 The most recent surveys have confirmed that this wreck is the U 87.

U 87 by CBHC_RCAHMW on Sketchfab

On 25 December 1917, the U 87, under the command of KapLt Rudolf von Speth-Schülzburg (1884-1917), torpedoed and sank the AGBERI in St George’s Channel. Travelling in a convoy from Dakar to Liverpool, this Elder Dempster steamship carried a cargo of African produce. Without warning, U 87 moved between the armed convoy vessels and attacked the merchant ship. Even though the submarine had destroyed all the portside lifeboats amidships, AGBERI’s passengers and crew were able to escape the slowly sinking ship in the remaining boats. Over the next hour, a small, but fierce sea battle between the convoy’s escort ships and the German submarine waged around the survivors in their rowing boats.

One of the convoy ships, PC 56, was only about 140 metres away from the AGBERI when she rammed the attacking submarine. In quick succession, the escort vessel BUTTERCUP fired at U 87 and hit the conning tower. Some sources also suggest that PC 56 dropped additional depth charges to force U 87 to resurface and thus increase its vulnerability. Following another ramming by PC 56, which severed the fore deck gun and may have further resulted in a significant gash across the hull, U 87 sank with all her 43 crew on board. Her wreck lies near that of the AGBERI, 29 kilometres NW off Bardsey Island.

The U 87 was a submarine in the German Imperial Navy. The vessel was ordered from the Kaiserliche Werft in Danzig (now Gdańsk in Poland) in 1915 and launched a year later. At the time of her construction, the U 87 was one of Germany’s most advanced submarines. Over the course of five patrols between spring1916 and late 1917, U 87 sank 22 ships and damaged another two.

U 87 undertook her first commission under KapLt Rudolf Schneider (1882-1917) on 26 February 1917. Following Schneider’s drowning on 13 October 1917. The U-boat largely patrolled the north Atlantic and western and southern coasts of Ireland, but she was also active in Welsh waters.

Before Rudolf Schneider took the command of U 87, he captained U 24 from 6 December 1913 to 3 June 1916. In this period, he sank twenty-six vessels, damaged another three and took one ship as a prize. Among the destroyed vessels was the British-owned White Star passenger liner ARABIC, which Schneider sunk on 19 August 1915. Following so closely after the sinking of the LUSITANIA on 7 May 1915, in which 1,198 people were killed, the ARABIC Incident escalated the already tense relations between Germany and the USA over the following months and threatened to pull the still neutral country into the war.

When Schneider sank the ARABIC, she was travelling with 181 passengers and over 300 crew from Liverpool to New York. Since June that year, German submarine commanders had been under strict orders not to attack passenger liners without warning and to ensure the safe escape of passengers and crew before launching an attack. The submarines were only allowed to open fire where passenger ships tried to escape or attempted a counter-attack. As Schneider was under the impression that the ARABIC might attack U 24, he fired a torpedo at the passenger liner, which sank within seven minutes. The ARABIC Incident caused a diplomatic crisis between Germany and the United States of America because three American passengers were among the forty-four dead. Johann Heinrich von Bernstorff (1862-1939), the German ambassador to Washington, D.C., had been given the task of convincing the US president, Woodrow Wilson (1856-1924), that Schneider had not violated the rules of the war at sea. By 3 September 1915, Bernstorff reported to his government in Berlin that he had reached an agreement with the Americans according to which German submarines must issue a warning before attacking any passenger ships. In turn, the German Foreign Ministry issued a response in which it regretted the loss of lives, but also defended Schneider’s actions. The ministry stated that he had simply followed orders.

Whereas German-American tensions were by and large resolved over the following month, Schneider’s actions immediately sparked the BARALONG Incident on the same day which escalated the war at sea between Germany and the United Kingdom. The ARABIC was the second of four ships sunk by Rudolf Schneider to the south of Ireland on 19 August 1915. The British Q-ship HMS BARALONG, disguised as a US vessel and patrolling British waters under the command of Lieutenant-Commander Godfrey Herbert (1884-1961), had picked up ARABIC’s distress signal when she was torpedoed by U 24. The BARALONG began hunting for Schneider and his crew, who had by then departed for the Scillys, but instead mistook U 27, who had just shelled the steamer NICOSIAN nearby, for ARABIC’s assailant. Herbert opened fire on U 27 and punctured the submarine’s hull. When twelve survivors of the German crew escaped the now rapidly sinking vessel and tried swimming towards the still floating NICOSIAN, Herbert continued to fire into the swimming submariners. Eight German sailors, including U 27’s commander KapLt Bernd Wegener, had survived this round of fire and escaped into the NICOSIAN, which in turn was quickly boarded by BARALONG crew who shot the remaining German crew on sight. Afterwards, the British Admiralty attempted to suppress Herbert’s report of his and his crew’s conduct. The news broke anyway through the shocked American survivors from the NICOSIAN after they had landed in Liverpool and contacted their consul to report what they had witnessed. In addition, they also gave interviews to American newspapers on their return home a few months later. Germany placed a complaint with the American ambassador and demanded Herbert tried for murder. The incident subsequently escalated the war at sea as submarine commanders regarded innocent-looking ships flying US ensigns with increasing suspicion, thus diminishing the efficiency of the British Q-ships.

By the end of 1915, Rudolf Schneider was taken off the U 24 and took command of the new U 87 on 26 February 1917. Between May and August that year, he sank nineteen ships and damaged another two. On 13 October, Schneider and his crew were caught in a storm and he was swept overboard. According to the official war diary, the crew attempted to throw their commander a lifesaver, but he failed to reach it. Ten minutes later, Schneider’s body was recovered from the sea by ObMaschMt Reuss who had jumped into the water with a rope tied to him. Despite four hours of resuscitation attempts, the crew failed to revive Schneider. His body was buried at sea and, as second in command, Rudolf von Speth-Schülzburg took over the U 87 and continued the patrol according to order. On 25 December, Speth-Schülzburg’s decision to attack the AGBERI resulted in his and his crew’s death in the counter attack driven by the BUTTERCUP and PC 56. It appears that machinist Reuss, who had tried to save his previous commander’s life, had been rotated off the U 87 by the time she went on her final patrol and survived the war, as his name is not included in any of the German casualty lists.