Finding out about the People on Board the Ships

There has never been a better time to research individuals who served during the First World War. The commemorative period, 2014–18, has resulted in a host of information being uploaded onto websites by organisations and communities, because new material has been uncovered or digitised and new research carried out. What follows is a ‘first steps’ guide to researching an individual seaman or woman who served during the First World War using some of these easily available resources.

Case study Read the case study of Will Gent, engineer from Swansea, for an example of the information on an individual that can be found, using some easily available resources

If the person you are researching died while serving on a ship in the First World War, one of the first places to look for information is the Commonwealth War Graves Commission’s website.

Fill in one or more of the boxes and click ‘search’. The information you can find includes the rank of an individual, their date of death, the name of the ship they served on, their age, next of kin and next of kin’s address.

Tip: You can refine the results by ticking the ‘Served in’ Merchant Navy and/or Navy boxes.

Tip: To search for those who died from a place, type a place name, e.g. ‘Swansea’, in the ‘Additional Information’ box without filling in any other boxes.

Tip: The Find Cemeteries & Memorials search page lets you search for a particular cemetery. Start writing the name or place of the cemetery in the ‘name’ box, this will bring up a list, you can then click on the correct one.  Then press ‘search’ this will bring up the link to that cemetery page, which links to names of those buried there, e.g. the entry for Holyhead (Maeshyfryd) Burial Board Cemetery lists the eight First World War Merchant Navy burials there.

Tip: You can download the results of a search as a csv. database file. This is useful if you have a large number of results that you want to scan through, or if you want to reuse the data.

A crew agreement lists all the crew of a vessel, their rank or rating, date of birth, where they were born, sometimes their address, their rate of pay and dates of joining and leaving the ship. Vessels which had agreements range from small fishing boats to the largest passenger liners with whole departments of deck officers, seamen, engineering and catering staff, amounting to as many as 400 individuals. Women also feature in the crew lists as stewards, nurses, matrons and in other roles. Vessels that were sunk by enemy action sometimes appear in the lists if there was time to evacuate the ship and save its documents.

Where to find crew lists

The Crew Lists of the Merchant Navy – 1915  Crew lists from the National Maritime Museum and The National Archives have been combined and then transcribed by volunteers to produce this online searchable database, which gives access to records of more than 750,000 seamen who were serving in 1915, providing details including their name, age, nationality, address, rank and name of the ships they served on.

For the other wartime years: 1914 and 1916–18, search the Maritime History Archive in Newfoundland, where the surviving crew lists are mostly held: 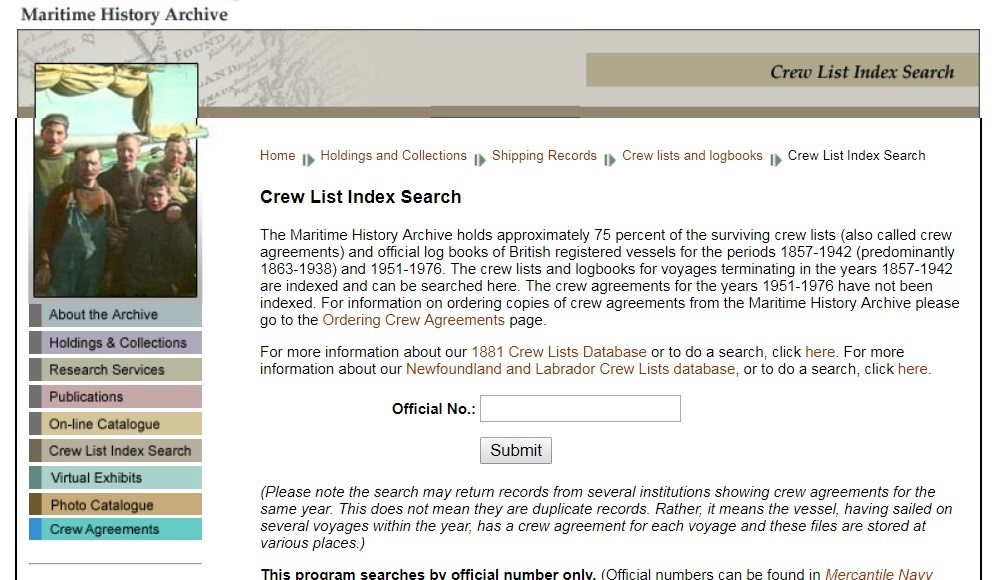 To search this database it helps to have the official number of the ship as ships’ names were often changed or reused. You can find this official number online in several ways, for example:

By entering the ship’s name, or a part of it, into the CLIP ship search page it will provide you with a list of the ships whose name matches, together with their official number. The advanced search allows you to input a range of dates and port of registry.

Or you can go directly to: Crew Lists of the Merchant Navy – 1915  and enter the ship’s name in the search box. For example, a search for the ship ‘APAPA’ will not only give you two crew lists from 1915 on that site but will also give you the ship’s official number: 136797. When you put this number into the Official No. search box on the Maritime History Archive website it brings up crew lists for 1916 and 1917. Only the 1915 crew list is viewable online, the crew lists in Newfoundland need to be ordered by clicking on the Ordering Crew Agreements link at the bottom of the page. There is a charge for obtaining copies of these and the fees are explained on that page.

The Central Indexed Register of Merchant Seamen entries for 1913–17 have not been kept, but the original registry cards for 1918–41 are held by Southampton Archives. They can be accessed online using the FindMyPast website. This set of records can be searched by name and/or by place of birth. Although the seamen indexed in these cards were recorded just after the end of the war, most would have served on ships during the war, and the photographs and personal information recorded can give us rare photographs of the seamen, their roles on board, the ships they served on and, in many cases, where they lived and even descriptions of their tattoos!

These records are especially valuable because they include records for those who survived the First World War and continued in the merchant service and include British subjects born overseas, and older crewmen and very young crew.

Example search results for place ‘Llanelly’ (note the old spelling used) below brings up 378 results, clicking on the blue photo icon on the far right of each name brings up the scans of the individual cards which can be downloaded.

Tip: when you have the search results, refine by order by ‘Event’ in the drop-down list, this will bring up the earliest results first.