The complex structure of shipwrecks with the myriad crevices, ledges and holes means they provide plenty of shelter for crabs, lobsters and shrimp. In addition, as seen on the SS Derbent wreck in 2019, other crustaceans such as amphipods can be found in significant numbers amongst the turf communities and in the tubes they construct themselves. Barnacles are also crustaceans and can be seen on deeper wrecks as well as shallow wrecks on the shoreface. 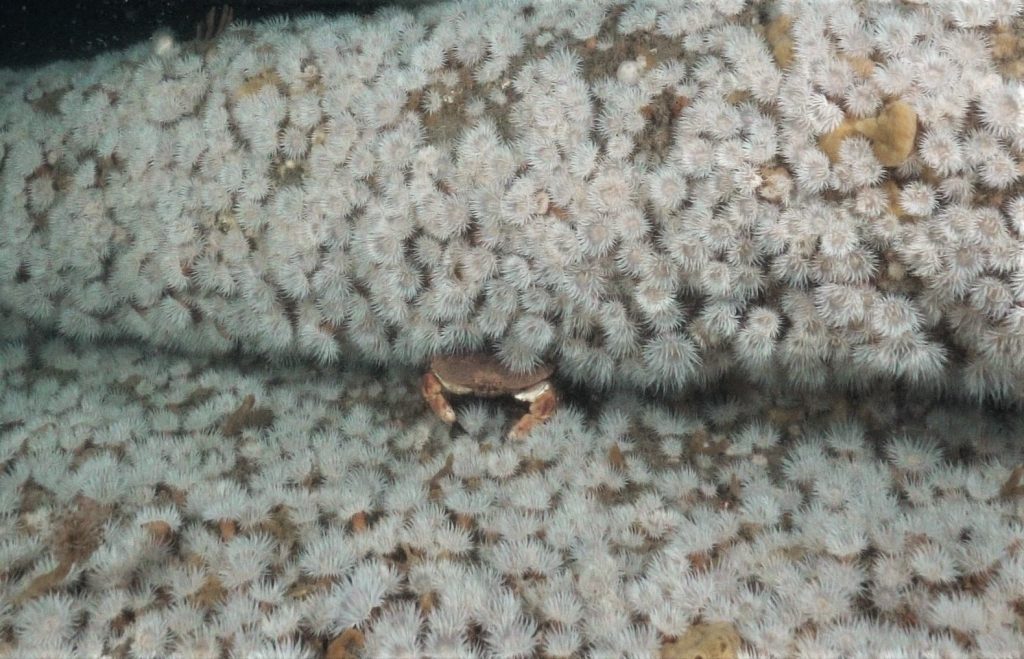 The distinctive and iconic form of the edible crab make it easily identifiable. The reddish-brown piecrust carapace and large and dark tipped claws giving the species a bulky and strong appearance. The image shows a specimen sheltering beneath the detached deck gun of the SS Derbent.

The velvet swimming crab is known for being aggressive when approached and will raise and spread its claws which have dark tips with blue to purple colouration. As the common name suggests, the carapace has velvety hairs covering it, and the rear most legs are flattened for swimming. The red eyes are very distinctive, and along with its aggressiveness, justify its alternative name of the ‘Devil crab’.

There are several species of amphipod that build mats of tubes that can cover surfaces and other marine fauna. On the SS Derbent a brown covering can be seen with holes in it, each hole is where an individual amphipod lives and feeds. The tubes even cover the stems of oaten pipes hydroids, as seen in both images. Please note polydora worms can produce similar looking tubes.