Case Study: The SS CAMBANK, a Merchant Ship from Cardiff

The SS CAMBANK, a Merchant Ship from Cardiff

To find out more about an individual ship sunk in the First World War you can follow the steps, which were taken to find out about the CAMBANK, a Cardiff ship sunk by a U-boat in 1915.

The first place to search for a ship is on the WW1 section of a website that is dedicated to the U-boat wars of the First and Second World Wars: Uboat.Net. This site has carried out extensive research on thousands of ships. If you know the name of the ship you want to research, put that into the search bar. This will give you a page showing the location of the sinking and links to more information. Clicking on the ship’s name will take you to the ship’s page which, in the case of the CAMBANK, tells that she was a steamer of 3112 tons and was built in 1899 in South Shields for the operator Merevale Shipping Co Ltd. of Cardiff. It also tells us when and where she was sunk, by which U-boat, where she was travelling from and to, the cargo s on board and the number of lives lost. 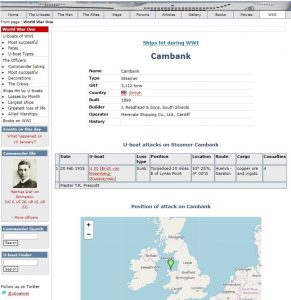 More about the Ship and the Wreck

From here you can search for the CAMBANK on wrecksite.eu to bring up more useful information such as the official ship’s number (IMO/Off), in this case we have found out the CAMBANK has the number: 110097, which will be useful for further searches.

The wrecksite page for the CAMBANK has relevant photos, an account of the sinking and information from dives on the wreck. It also gives information on the casualties of the sinking taken from the Commonwealth War Graves Commission. It states that the CAMBANK was originally named the RAITHMOOR. Ships often changed names but kept the same official number. It seems that the RAITHMOOR was owned by Walter Runciman & Company who sold her to Merevale Shipping Company, Cardiff in 1913 when she was renamed. A search on the Royal Commission’s online catalogue Coflein gives more information in their wreck site entry for the CAMBANK, including when and where she was built, her dimensions and technical specifications, as well as a list of further sources. 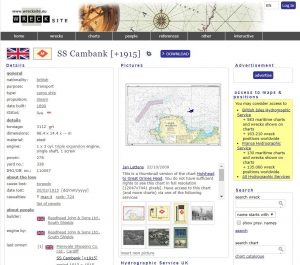 From here you can visit the CLIP databases and type in the ship’s number. This will give you a link to the full list of crew agreements for the CAMBANK – every year from 1899 to 1915. The 1915 crew list is available on The National Archives website, for the other years you will need to order them from the CLIP website where the scans of the originals can be downloaded for a small charge.

It is worth searching in the local archives of the place where the ship was registered. In the case of the CAMBANK, we know she was registered in Cardiff, so the place to look is Glamorgan Archives. A search in their online catalogue shows us that they have three crew lists for the year 1913. 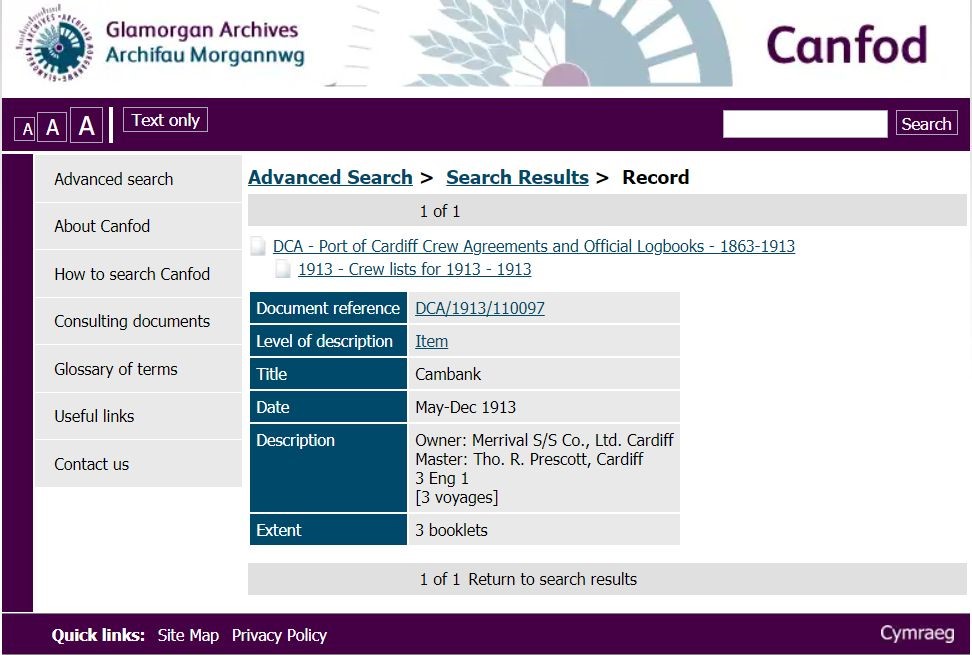 Who Owned the Ship?

To find out more about the company who owned the CAMBANK, the Merevale Shipping Company of Cardiff, search the local archives, in this case Glamorgan Archives. A search in their catalogue brings up crew agreements and log books for three other ships owned by the company all beginning with the prefix ‘Cam’ – the CAMROSE, CAMWELL and CAMDALE dating from before the war. A search for Merevale Shipping in The National Archives online catalogue gives the date of the incorporation of the company as 1904 and that the company was dissolved before 1916. An article in the Barry Dock News dated July 1915, states that a director of the company, Mr T P Thomas, was a ‘well-known pitwood importer’, which gives us more information about the company’s business, possibly before the war.

Photographs of the Ship in Her Glory

To find a photograph of the ship before she was sunk you can do a search on Google images –  nothing came up for the CAMBANK, so the next step was to search the National Museum of Wales’s online collections, which contain images of over 5000 steam ships. Their photograph of the CAMBANK had not been digitised, so it was necessary to contact the enquiry service to ask for a digitised copy of the photograph.

You can now search to see whether there are any reports in Welsh newspapers on the CAMBANK.

One of the Project’s Wrecks?

Because the CAMBANK is one of the wrecks that was surveyed as part of the U-boat project, research has been made available on People’s Collection Wales, including the crew list detailing those aboard when she was sunk. The Cardiff-based organisation, Tiger Bay and the World has collated information on Cardiff ships from various sources, including Glamorgan Archives, as part of the project and made this available on their website.

We have made the survey images of the wreck of the CAMBANK available too on the project website, which includes reconstruction animations and further imagery of 17 of the 168 First World War wrecks in Welsh waters.