The face of a merchant seafarer lost to the sea 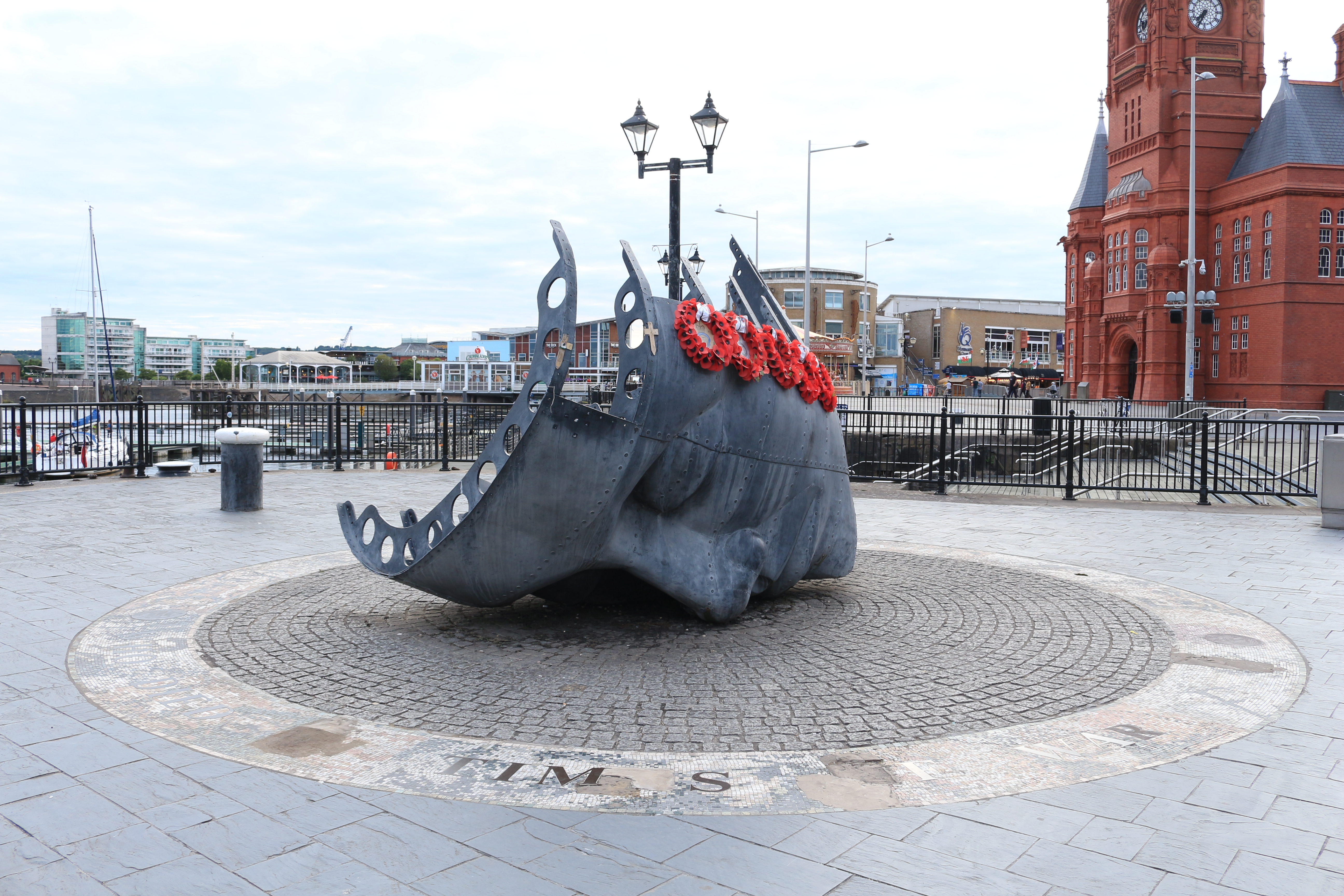 The face of a merchant seafarer lost to the sea

The Merchant Seaman’s Memorial in Cardiff Bay is in the form of a sleeping face fused with a ship’s hull, made by riveting plates of metal together. The technique is one traditional to early iron and steel ship building. The sculptor Brian Fell, whose own father had been a merchant seaman, was commissioned to create the work in 1994 by Cardiff Bay Arts Trust, Cardiff Bay Development Corporation, Merchant Navy Memorial Committee and Cardiff County Council.

Bill Henke MBE (founder of The Merchant Navy Association Wales) spent years raising funds for the construction of the memorial. There is a plaque recognizing his work outside the circular mosaic base of the memorial on which are inscribed the words:

Each May, The Merchant Navy Association Wales organises a remembrance service to mark the anniversary of the dedication of this Memorial. This year the service will be held at the Memorial (in Cardiff Bay) on 25 May 2019 at 11.00 am. The service will be multi-faith to reflect the sacrifices made by seafarers from all nations and will have readings from the Tanakh, the Bible, and the Koran.

Attendees at the service will include representatives from associated veterans’ groups, The Royal British Legion, The Mission to Seafarers, Royal National Lifeboat Institute, Maritime Volunteer Service, The Merchant Navy Associations of Swansea and Newport, Sea Cadets, the Royal Naval Reserve, local shipping companies, and the Maritime and Coastguard Agency.

Our project has been looking at the role the merchant ships and their crews played during the first World War.

South Wales ports had a vital role in supplying coal from Welsh mines to fuel the world’s ships, especially the Admiralty’s warships.  The allies were dependent on merchant vessels to transport troops, food, ammunition, raw materials and equipment. Important shipping lanes ran around Pembrokeshire to access the Atlantic, and around the island of Anglesey in the North to get to and from the port of Liverpool. The German U-boats deliberately targeted ships within these lanes, sinking them with torpedoes and sea mines. Over 150 vessels were sunk off the coast of Wales during the first World War and you can learn more about these vessels on the project’s website via our online map.

Crews who served aboard merchant vessels operating during the First World War were enormously varied – from local men on small fishing boats, to the 200-odd crew on board vast passenger liners who came from a dozen different countries. There were women serving as nurses and stewardesses and cabin boys as young as 14 years old.

Many of the Masters, First Mates, carpenters and engineers of the ships were Welsh, who had learned their trade from serving on sailing vessels before the war. Others joined ships from colonies overseas, settling in Welsh ports.

The names of those that died at sea are recorded on memorials in towns and villages around Wales, but most have no grave but the sea, which is why this memorial, dedicated to the merchant seafarers from both World Wars, has a special poignancy.

We take this opportunity to thank National Lottery players who allow the Fund to invest money to help people across the UK explore, enjoy and protect the heritage they care about. www.hlf.org.uk.  Follow the Heritage Lottery Fund on Twitter, Facebook and Instagram.