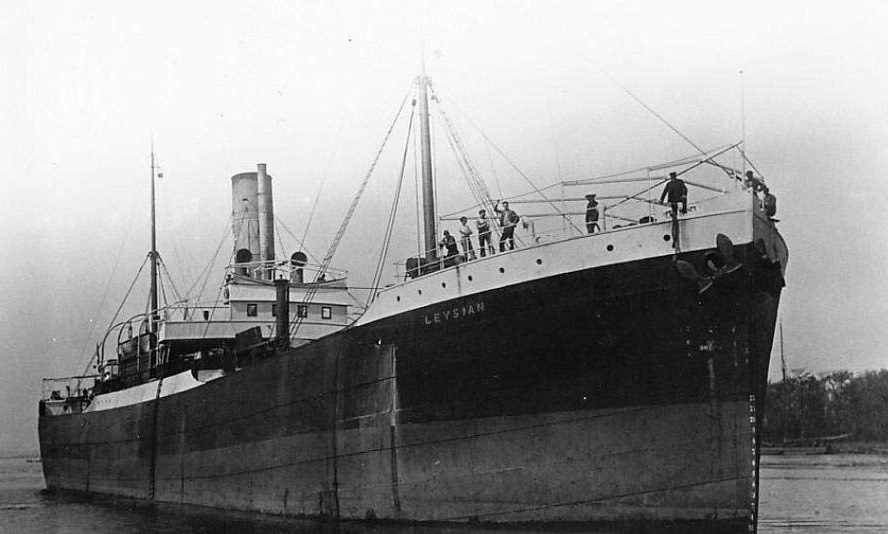 As part of this project the Nautical Archaeology Society (NAS) is running an underwater field school at Abercastle from 7–17 June 2019 based around the wreck of the SS LEYSIAN which was wrecked in the bay on 20 February 1917.

As a precursor to the field school, research is being carried out into the history of the vessel. Her brief timeline is as follows:

There are conflicting accounts associated with the wrecking, the most common being that she mistook Strumble Head for St. David’s Head in fog, but other accounts refer to her being chased onto the rocks by a German U-boat, the compass having been tampered with, and a mutiny on board by around 50-muleteers. Fortunately, no lives were lost, but from the date of the disaster (20 February 1917) until she eventually succumbed (around eight months later) and sank during an Autumn storm we are struggling to uncover any details.

We believe that throughout the Spring and Summer of 1917 some salvage work was carried out on the wreck by a Captain J. Driver, possibly using a steam winch erected on the cliffs above the wreck to haul material from the vessel up the cliff face. However, considering that this 400ft vessel (which is almost half the length of the Titanic) sat upright in shallow water spanning Abercastle bay for around eight months, and was very visible from both the beach and cliff tops, we have been surprisingly unsuccessful in finding any records, articles, artefacts, stories or pictures from this period.

Can You Help Us?

If you have any information about this wreck, we would be delighted to hear from you, and if you are in Abercastle between 7 & 17 June, do please come along and introduce yourselves.