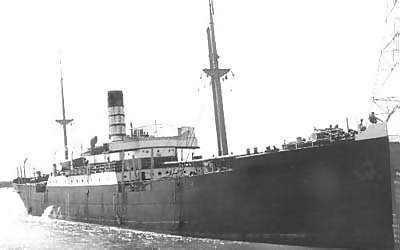 The VANDALIA was torpedoed and sunk by German submarine U-96 on 9 June 1918 about 18 miles WNW of the Smalls. At the time, it was owned by the famous Cunard Steamship Co Ltd, Liverpool. The VANDALIA was one of 20 ships lost by the company through enemy action, including their flagship the LUISITANIA on 7 May 1915 with the loss of 1198 lives.

Under the ship’s original name, ANGLO-CALIFORNIAN, it had been involved in a notable encounter with U-39 on 4 July 1915. Whilst enroute from Quebec to Avonmouth with a cargo of 927 packhorses for the Western Front, the submarine was spotted on the surface. The master, Frederick Parslow, ordered a SOS signal to be sent which was answered immediately by a British warship. This gave the Parslow hope that help was nearby and he continued to steam at full-speed trying to outrun the submarine.

The ship was then chased for half an hour with the U-boat gaining steadily and then, for an hour and a half, the U-boat fired at the ship as the ANGLO-CALIFORNIAN steered a zig-zag course. The British vessel was unarmed and frequently hit.

Eventually Captain Parslow decided to obey the U-boat’s signal to abandon ship to save lives from being lost. The ship’s engines were stopped and lifeboats lowered.  The submarine ceased firing and closed in. At that moment, the armed ship PRINCESS ENA, which had slowly been overhauling the submarine, opened fire at 9,000 yards. The shot fell short and did not deter the submarine’s crew from opening fire at close range on the ANGLO CALIFORNIAN’s bridge and boats.

During this last attack, Captain Parslow was killed on the bridge. Stepping in to take the master’s place, the Chief Officer again ordered the ship to be abandoned. The remaining boats were manned and lowered just as the destroyers MENTOR and MIRANDA arrived. The U-39 made its escape.

Amongst the other officers showing remarkable bravery were the son of the master (the first mate), who had remained on the bridge with his father throughout, steering the ship. The wireless telegraph operator had also stayed at his post, accurately sending and receiving messages. A veterinary surgeon (F Neal), who was in charge of the horses on board, not only rendered aid to the animals but also assisted wounded crewmembers.

The ship was taken into Queenstown, now Cobh, where Frederick Parslow and 8 of his men are buried in the Old Church cemetery. Fourteen mariners, without a grave, are named on the Tower Hill, London, memorial to the merchant marine. The nationalities represented amongst the dead include British, Canadian, American, Russian and Finnish.

To recognise the gallantry of Frederick Parslow, he was made a Lieutenants in the Royal Naval Reserve in May 1919, which allowed him to be awarded the Victoria Cross. Parslow also received the Lloyd’s Medal. In addition, a cheque for £250 was awarded to the ANGLO-CALIFORNIAN by Lloyd’s as an honorary acknowledgement of gallant conduct. The Chief Engineer, James Crawford, was awarded a Distinguished Service Medal

It was later reported in The Cambrian Leader on 5 July 1915, that the New York American newspaper had featured an article in which the crew of the U-39 are stated as having agreed that the ANGLO CALIFORNIAN’s captain ought to have received the Iron Cross, a German medal.

The ANGLO-CALIFORNIAN was subsequently sold to Cunard Steamship Co Ltd in 1916 and its name was changed to VANDALIA. Thereafter it was managed by Lawther, Latta & Co of London. In the torpedoing of the ship by U-96 in June 1918, there were no casualties. The vessel took two hours to sink and hence the crew were able to make good their escape.

Commemorating the Forgotten U-boat War around the Welsh Coast 1914-18: Exploration, Access and Outreach is a collaborative partnership project between the Royal Commission on the Ancient and Historical Monuments of Wales, School of Ocean Sciences at Bangor University, and the Nautical Archaeology Society.