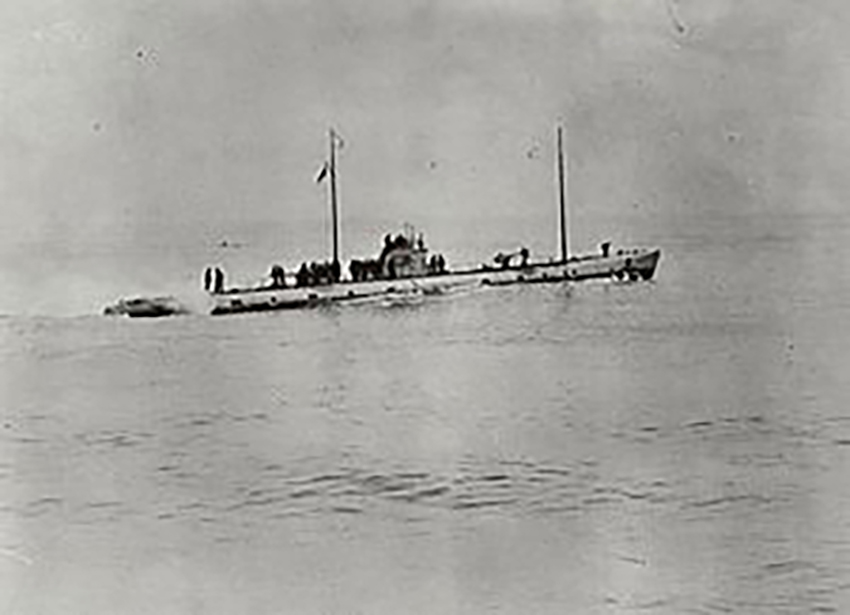 SS Boscastle was built in West Hartlepool for E. Jenkins and Co., Cardiff. Her description at the launch in 1912 were as follows:

The saloon, staterooms, captain’s, officers, and engineers’ rooms, etc., will be fitted up in houses on the bridge deck, and the crew’s berths in the forecastle.

Triple-expansion engines are being supplied by the Central Marine Engineering Works of the builders, having cylinders 22in., 36 in., and 60in. diameter, with a piston stroke of 39in., and two large steel boilers for a working pressure of 180lbs. per square inch”.

The naming ceremony was performed by Mrs. Jenkins, Cardiff, wife of the owner.

The Boscastle was chartered by the Admiralty for war work and at the time of her sinking she was carrying Welsh steam coal from Barry in South Wales for the British Fleet of warships stationed at Scapa Flow.

The German submarine, U-111, was built early in 1917 at Vegesack, Germany, by Bremer Vulcan under subcontract to the Germaniawerft in Kiel and launched on the 5 September 1917. She arrived in her first patrol area near St. George’s Channel during the first week in April. On the 7, she sighted her first target, the 2,346-ton S.S.Boscastle. The submarine made a surface torpedo attack and sank the ship with a single torpedo. 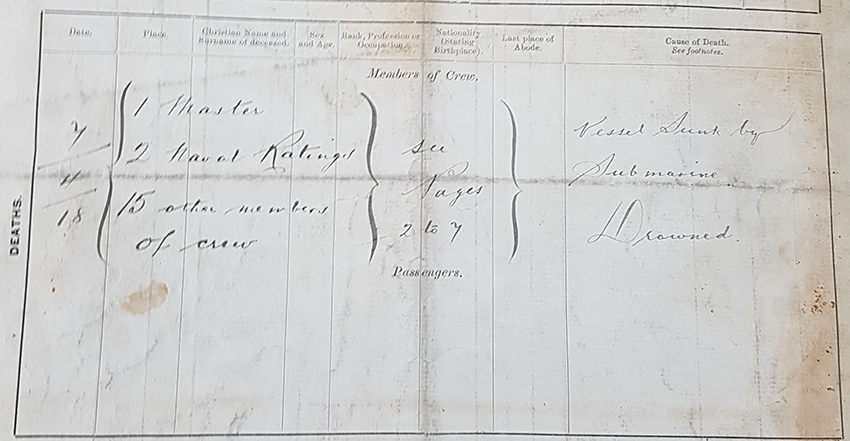 9 days after Armistice (11 November 1918) U-111 was surrendered and interned at Harwich. The following April she was given to the United States Navy and ended her life as target practice in 1921.

Among the eighteen crew who lost their lives that day were:

Among those killed were also four seamen from India they are all listed as “Fireman, Indian Merchant Service”

No further details are given for these men. It was not surprising to have Indian crew on board British merchant ships, and crews were often composed of at least 30% nationalities other than British. Indian or African crewmen worked below decks in the stokehold of the ship stoking the fires with coal as ‘firemen’, this was hot, hard and dangerous work and when the ship was attacked by U-boats they were the most vulnerable to exploding boilers and being trapped on board as the ship sank. Work is being undertaken to explore the role of BAME seafarers in the War at Sea and the U-boat project is looking at the diverse crews who served on board the ships sunk around the Welsh coast during the First World War.

More information about the project’s aims and funding can be found here:
https://rcahmw.gov.uk/world-war-one-u-boat-partnership-project-gets-green-light-from-heritage-lottery-fund-for-wales-year-of-the-sea-2018

Further information may be obtained by contacting:
e-mail: uboat@rcahmw.gov.uk